Spooky season is here, and it’s right here in my bullet journal! October 2019’s spreads are extremely exciting for me; I love all things cryptic, supernatural, and magical and I was more than happy to include these vibes in this month. Please enjoy my journal and help yourself to the downloadable sticker printables.

Theme: Supernatural and superstitious beliefs, places and beings from traditional folklore and fairytales.

Did you know that Sirens weren’t always creatures of the sea? I didn’t! Until I wanted to feature them as the monthly trivia! I write all about how they were originally winged women of the sky in The Odyssey, and how their reasons for seduction, along with their physical features, changed over time.

Unfortunately, these beautiful illustrations were found on Pinterest and I wasn’t able to find the artists. If you know who they are, I’d love to give credit for them! I believe they are two separate artists, although the two artworks really complement each other.

The monthly spread’s washi is a blue-green, mountainous rock formations in the sea. It reminded me of where you might find dangerous sea or sky creatures, like any of siren interpretations from the page before; I can imagine them waiting to lure in a lone, passing boat with promises of knowledge or sex—the grey, weeping skies make the tape look all the more haunted.

The word of the month, guileless, describes the exact type of victims that bogeys like; someone who is open and trustworthy; someone like this may often assume the best of others, trusting others easily as well.

The colors of a peacock are so beautiful and mesmerizing, as seen in this week’s washi tape and sticker. Turns out that there’s plenty of superstition about this animal across several cultures! I gladly wrote some examples why in the trivia.

Ghost town week! In my state, there’s a State Park dedicated to the ghost town of Bodie (located near the California-Nevada border, a bit north from Yosemite) and I’ve dedicated this week’s trivia to it.

The washi tape is of hills, similar to the ones surrounding Bodie.

The Witch’s Cottage in the Woods is such a prevalent image across several cultures, so it’s no surprise I chose this washi tape and an illustration by LinaForrester on Etsy. her award-winning art often has magical subjects. This painting is literally called Where the Witch Lives. And, although it is lacking some visible chicken feet, I can imagine they’re hiding behind the sloping walkway—and Baba Yaga is just waiting for someone to knock on her door!

Baba Yaga is a famous figure from many Slavic folklore. I learned a little about her in my bogey-themed English class, she’s such an interesting figure. It’s so funny that Studio Ghibli has often inspired influence from Baba Yaga in both Spirited Away and Howl’s Moving Castle.

Perhaps in your culture, too, butterflies are associated with ghosts and spirits. Filipino culture has many superstitions and plenty of spooky mythological creatures, and this happens to be one of the more well-known beliefs. I’ve featured it in my fourth week of October!

I haven’t experienced a situation where I ‘met up’ with a dead loved one via their visiting the mortal realm in a fluttery form, but I certainly think it can happen. You know, the world works in mysterious ways…

The ending week of October 2019 will not actually have a full moon but it’s included here anyways á la washi tape, in the spirit of Halloween. I’ve paired it with this handsome werewolf illustration by @aprilsolomonart, and write about why they’re associated with the full moon and then some.

The little excerpt on the bottom left corner felt so small to write it because I could go on and on about werewolves. I wrote an entire paper on werewolf iconography and portrayal for an English class, it’s probably my most favorite paper I’ve written thus far! I readily included some of my own writings in this week’s trivia.

With spoopy season coming to a close, I get a little sad… Thankfully, my 2019 October pages embodies the spirit of all things spooky, I can be slightly less sad moving onto the next phase of Autumn, knowing I can look to this month’s spreads for some supernatural vibes… for all eternity! Mwahahaha!

Originally published on my old blog, The Plant That Never Blooms (on Blogspot) 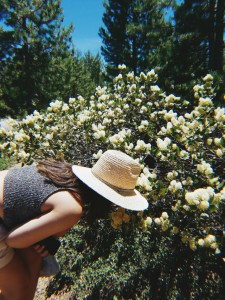